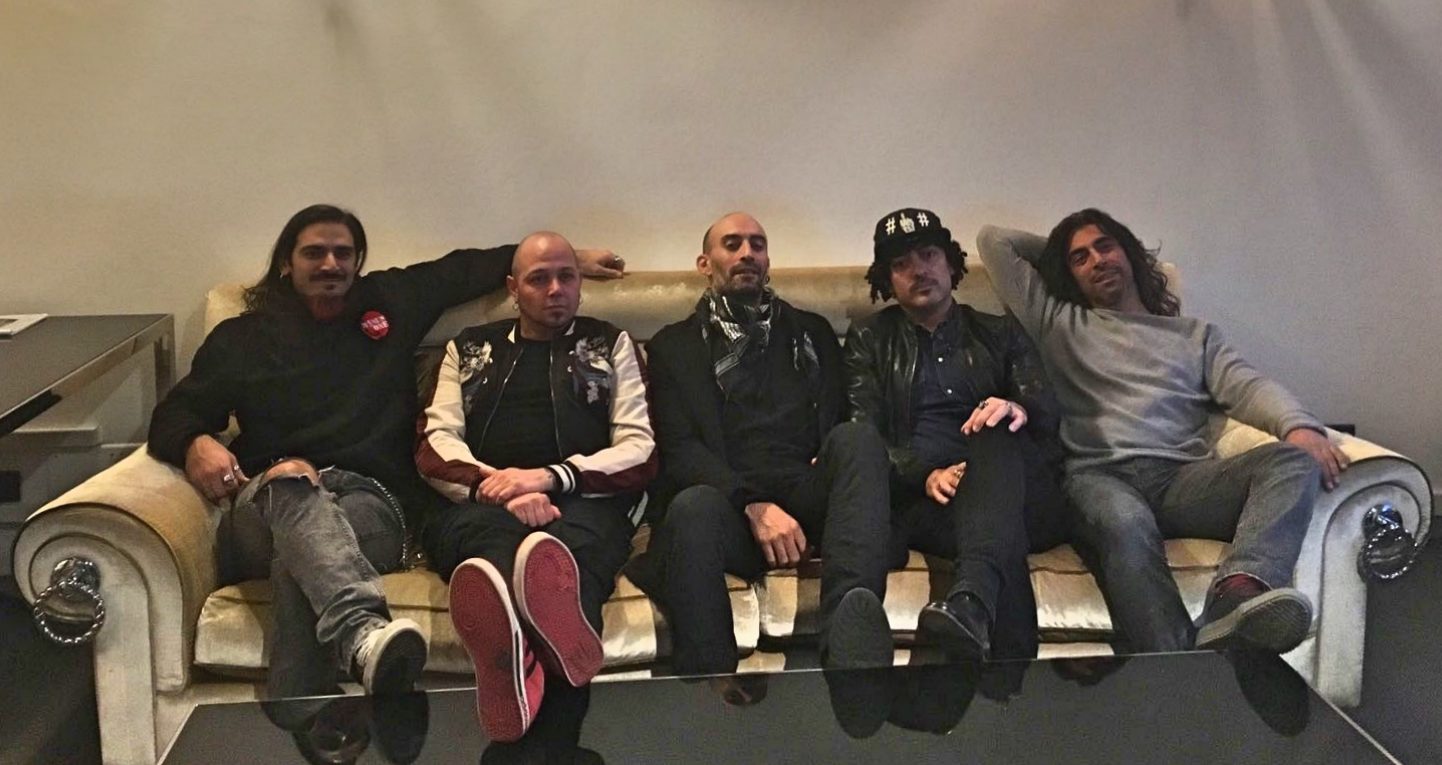 ESC+Plus caught up with the Cypriot 2016 Eurovision act, Minus One. The guys took the time to answer our interview about Eurovision and their latest and upcoming projects. We do not want you to lose more time reading introductions, they do not need that at all.

ESC+Plus: Hey guys, thanks for your time to answer our questions, get ready for them! Minus One is the proof of a solid band who went further than Eurovision, but the contest itself had to be a real challenge for you, when it comes to represent your nation, Cyprus. How was the whole experience and what did it mean for you all?

Minus One: We knew since the beginning that it was going to be hard because, with one exception, historically rock bands do not go well at Eurovision. We were surprised when we were selected, but also honored. We knew that we had a solid song, though, and that we were well prepared. We cannot deny that we think that the jury vote penalized us a bit too much. But our country has compensated us for any bitterness, even if Cyprus companies remains incredibly and stupidly averse to any form of sponsoring or advertisement, which seriously hampers any tentative of a local act to try to raise money for promotion. It is one of the reasons that many Cypriot singers move abroad.

ESC+Plus: What’s the moment of the whole Eurovision season, since you were selected to represent Cyprus, that you remember as the loveliest?

Minus One: We think the first time we went on stage with more than 200 million people watching from all over the world. But in reality, there were so many lovely moments! The friendship with other artists; the late nights jamming with them; the fans; the concert at the Hard Rock Café with Gabriela, Sergey Lazarev and Highway… and many, many more. It was, simply but, an amazing, once in a lifetime experience…

ESC+Plus: Which of the participating entrants are you still keeping any contact with? Is there any song in particular that you think it should have placed higher on the scoreboard, apart from yours?

Minus One: We have remained in full contact with Barei as we have developed a strong friendship with her and her alleged Patricia Ocampos, which is in charge of her marketing issues. But we still cherish the time spent with Ivan of Belarus, Douwe Bob, Gabriela, Sergey Lazarev. We would love to play with them all again.

“We have no other job than this one: we breathe music, we live music, we play music, we sing music, we rock music. This is our strength”.

ESC+Plus: Jamala, from Ukraine, has received multiple critics after winning the contest due to the content and the story behind her entry ‘’1944’’? From you very own point of view, how did you react to this and did you ever consider to enter Eurovision with a claiming message or personal story to impress the viewers?

Minus One: We were and are quite against the exploitation of a music festival to express political views, opinions, and messages. Music unites people, politics divide people. We are socially involved in many charity activities. But at Eurovision, politics should stay out of it. And should stay out of jury decisions.

ESC+Plus: Cypriot Broadcasting Corporation has already revealed who will be following your footsteps on the contest, Hovig, who also competed for the Eurovision ticket at 2015 Song Project. Are there any tips would you send over to him? Which style do you think Cyprus could be more successful with?

Minus One: Do not count on support from Cyprus companies. We were sponsored mainly by foreign people or companies, which is extremely sad. And at the end of the day, we paid 70% of all costs ourselves. We think that Hovig should sing in English, a light and happy song such as the one of Frans this year. But the best advice is: enjoy every minute of it, it’s a fantastic experience….

ESC+Plus: Now talking about recent developments in your career and the months after Eurovision, what has Minus One been up to?

Minus One: We spent June and July in concerts in Cyprus, most of August on holidays and Chris and Amerikanos got married this year and wanted to go on honeymoon, and again September and October in concerts, many of them! I October we released our third song, Save me, with its relevant video, and November is totally dedicated to our new songs.

ESC+Plus: So, we know you have been gigging around Cyprus a lot and also in the studio recording new material, what else can you tell us about this? Is there anecdote or funny moment you can remember and tell to the readers? For sure, there must have been plenty of them, that represents the spirit of the group.

Minus One: Yes, we certainly have fun when we play and go around. But one episode stands out, also because we shared it with our fans. After the first Eurovision rehearsal, we were literally sandblasted on Facebook, because we had cages on stage. We even got hate messages, comparing us to ISIS!!! It was disheartening, as there was little we could do, also because we did not want to change it. But we must have received 500 messages against it…. So we were sitting at the bar in the morning, wondering what to do, when our manager GP had an idea: what if we could make fun of the whole thing? And so we came out with THIS VIDEO. It was fun to make it as it was to watch the results the day after: 77.000 views in almost no time, every one laughing about it, and the crisis was averted….

“Life as a rock star can be nice”

ESC+Plus: Are you currently in the making of a new album, LP… which projects are in mind? What can you tell us about your latest release ‘’Save Me’’?

Minus One: We have written 3 new songs and are recording them at Fonoprint in Bologna, Italy, as we are replying to this interview. We want to release then by end year. We will then compile all our songs of this year, including a couple of covers, into an album.

Save me … we wrote the song in April!! But due to all the projects and live events we had, we could make the video only in October! We spent the whole day in the water, thanks God Cyprus sea is still very warm even in late October..

ESC+Plus: An impressive video for Ed Sheehan’s Photograph cover version was uploaded to your YouTube channel, who had the idea to use Eurovision footage, why and our congratulations for such a professional and meticulous job!

We love the video, the director Emilios Avraam is the one who does all our videos, he is really talented. But the song gave us some headaches. We recorded an extended version, with a very nice chorus and a superb guitar solo. But when we presented it for approval to be released, we were hit by a “not now”, due to the plagiarism court case that Ed Sheeran is being confronted with. We waited a couple of months, then decided to make our version as the original one (this way one does not need permission to publish it, as the rights are recognized to the original writer of the song), and we finally published the video. We love our take of the song, we feel it is very powerful and with a lot of soul. Francois voice is perfect for it. We hope the court case will be sorted out quickly so that we will be able to publish our original first version.

ESC+Plus: As we informed to our readers, you have recently performed in Florence, which memories do you usually keep from these performances and in comparison with Eurovision, which ones do Eurovision have that these smaller ones don’t?

Minus One: Playing in front of 16.000 people is amazing, adrenaline runs high and fast. But of course, the crowd appears like a mass of people: you feel to heat, the screams, it is powerful but distant. When you play in front of 300 people, you can feel their breath, you can look at each one of them in the eyes, you can connect with them one by one. It is intimate, and still very strong. We love both events though, and we believe any artist needs both.

ESC+Plus: And now it’s real time to announce the big news, because we have heard something and I guess you can already confirm this… is there any country you are planning to step into in the upcoming months?

Minus One: Oh God we would like to leave on a world tour and come back in one year time!!!!! We want to tour BADLY! Next year, our targets are Greece, Italy and Spain, and we are organizing tours in all these countries: we want to enjoy our Mediterranean belt!!!! But we are also very popular in Sweden, so if we can organize something there also… well we won’t say no!

ESC+Plus: Why Spain? What do you like the most about the country and about our national music panorama?

Minus One: You mean aside our beloved Barei??? J Spain is like us: Mediterranean people who can work hard but still enjoy life, sun, sea, food, each other company. The towns of Spain are amazing, the food great, the weather like ours in Cyprus, the crowds are great…. We just can’t wait to perform there!

ESC+Plus: Is there any specific stage you want to go on?

Minus One: All, but of course we would love to visit amazing towns like Toledo and Sevilla, and play on some beach events such as in Alicante….

ESC+Plus: We will be anxiously waiting for updates on this. By the way, I need to ask you… what’s the question you have been asked the most in the past few months? Because now, it is your chance to reveal something that you have never been asked and you want the readers to know about!

Minus One: They all ask us about Eurovision, if it was worth the money and the efforts. And the answer is a clear YES. But there are other questions which have been asked very frequently, and it was the room numbers and the hotel names when we travelled around….. life as a rock star can be nice…..

ESC+Plus: And last but now least, what’s the secret behind Minus One? What makes your unity so effective?

Minus One: We have been playing together for the last 7 years, we love playing together, we have no other job than this one: we breathe music, we live music, we play music, we sing music, we rock music. This is our strength. We want to succeed but in any case every song we play, every song we write, we do with the passion and love for what we do. It comes from within us, from our guts, our hearts, our brains. You can feel it all in our songs…..

ESC+Plus: Thank you for this interview guys and may the best come, we wish you a lot of success! See you really soon!