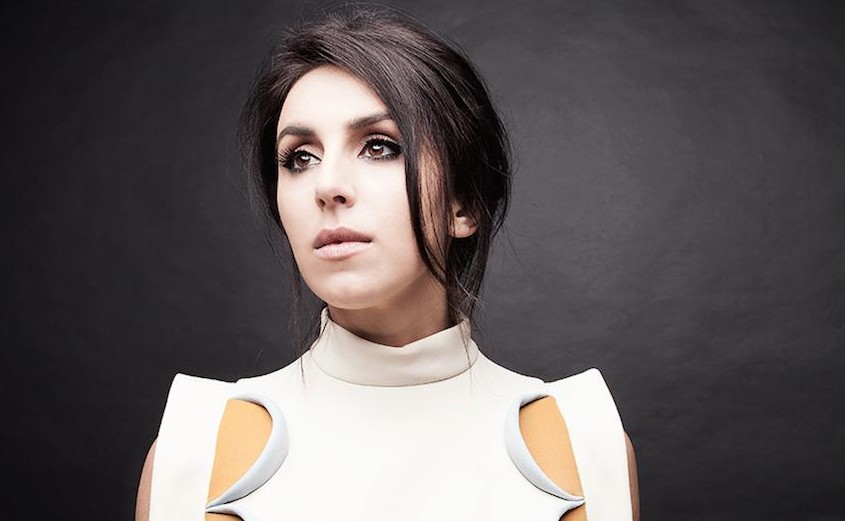 ESC+Plus has talked to Jamala, semifinalist of this year’s Ukrainian national selection for Eurovision. Jamala will perform “1944” in the first semi-final set on February 6.

ESC+Plus: Hello! First of all, thank you so much for your time and congratulations on having been selected to take part in the Ukrainian national selection for Eurovision 2016!

E+: Can you tell us about you, your musical career and important achievements?

For my opinion, it’s not humble to boast about your own achievements. So we stick to the facts. I made my first professional record at the age of nine, it was all-day session to record the album of Crimean Tatar songs and songs for children. I finished Simferopol Music College and Kiev National Music Academy as opera singer and was going to make career in classical music, but plans changed. In summer 2009 I went to “New Wave” International contest of young singers in Latvia and got Grand Prix there. Talking about awards, I have few more: ELLE Style Award (nomination “Singer of the year”), Ukrainian National Award “Person of the Year” (nomination “Idol of Ukrainians”), Best Fashion Awards (nomination “Inspiration of the Year”) and some more. I have four albums of my own music. I mean all songs written by me. The latest record “Breath” was released in October 2015. I had very interesting experience with cinema. I played the main female part in historical drama “Guide”, which got the best box-office among Ukrainian movies in 2014, and had a cameo in fantasy movie “Polina” by Belgian director Olias Barco. “Polina” will be released by the end of this year.

E+: What impelled you to take part in “Ukraine Eurovision Song Contest 2016”?

I decided to take part in contest because I’ve written a song that fits the Eurovision perfectly.

E+: How did you feel when you knew you had qualified for the semi-final? Did you expect it?

I had no doubts. It’s not an achievement at all. The first victory would be if I win the Ukrainian selection.

E+: What it would mean for you to represent Ukraine?

It’s a great honour and a great responsibility. But I feel that I’m ready to represent my country worthily.

E+: Can you tell us about your song? What is the story behind the lyrics?

The title of the song is «1944». I wrote it in last year, but the origins of it are in my childhood. It’s inspired by story that my grand grandmother told me when I was small. The song is about the tragedy that happened to our family and all Crimean Tatar in 1944. I mean the deportation of Crimean Tatar people from Crimea to Central Asia, the crime made by Soviet government. They packed all people to the vans like beasts for a few weeks with no food and water. Those who couldn’t survive were thrown out and left lying on the ground. My grand grandmother lost one of her daughters as well. But “1944” concerns all people who had their own horrible tragedies in the past, such as Holocaust. We should always remember and never forget them to avoid like in the future. I want to deliver this message to as many people as possible.

E+: Why do you think your song has to be selected for Stockholm? What are you strengths to reach the top in the competition?

It’s not my style to be so bold about my strengths. I believe in my music and I believe that this song could represent Ukraine worthily. People should choose what song they like most. I hope it would be mine.

E+: How are you preparing your stage performance for “Ukraine Eurovision Song Contest 2016”?

I rehearse it with my back-vocalists and prepare beautiful dress 🙂

E+: How do you remember your participation in the national selection for Eurovision 2011?

I don’t want to recollect this event. I think that some of jury members of national selection and some people in Ukrainian National channel were corrupted. I still have a scar on my heart from that time. I hope this year selection will be fair and transparent.

E+: Do you usually watch Eurovision? What are your favorite songs in the history of the competition?

Yes, I do. I don’t have favorite song; I usually pay attention to performers, musicians, vocals and musical background. These are few songs that I like: Raphael Gualazzi “Madness of Love”, The Common Linnets – Calm After The Storm, LOREEN – “EUPHORIA”.

E+: If you could choose a Eurovision former participant to sing with, who would it be?

I would love to sing with Raffael Galazzi. He so good!!! I also like Loreen for her insane energetic. I can’t say that I’m big fan of Eurovision, but sometimes there were really interesting guys.

E+: Besides Eurovision, what are your plans for this year?

Last autumn I released new album, so there will be a lot of touring. This is the main plan. I’m going to present new music all over the country. I will also perform on summer musical festivals.

E+: Finally, can you send a message for our readers and Eurovision fans?

Creating the future we should remember our roots, where we came from. If you really respect and venerate your family, your own culture and history, you learn how to respect other cultures. It’s the way we could make this world better. We could build a future Where people are free to live and love. The happiest time.

E+: Thanks for your time and good luck!