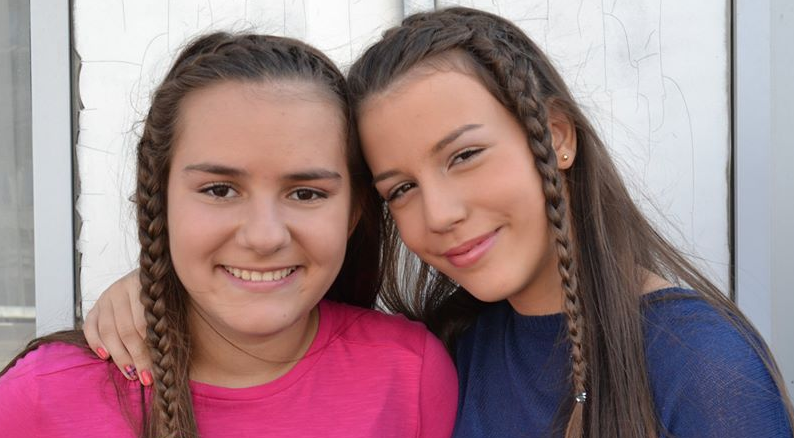 Today, it’s time to talk to Ivana and Magdalena from FYR Macedonia!

Hello girls! First of all, congratulations on winning the ticket to represent Macedonia at Junior Eurovision 2015!

E+: How did you feel when you were announced you had been selected to represent FYR Macedonia?

I: My feelings were indescribable. I was the happiest person in the world and I was very excited.

M: I was very happy when my parents told me the good news. Anyone would be happy about those big and beautiful news. I wasn’t so surprised because when the audition ended I was sure that I had a big chance to go to the contest as I hadn’t been nervous and I had sung both songs pretty well.

E+: As far as we know, you were selected through an internal procedure where you had to perform some Macedonian JESC hits. Can you tell us more about the selection process? How did you experience the live auditions? Did you performed as a duet?

I: Well, at the audition we performed one song chosen by us and another one chosen out of three songs that had represented our country at JESC. I sang “Almost is never enough” by Ariana Grande and “Prati mi SMS” by Bobi Andonov. Magdalena sang “Tajno moja” by Toshe Proeski and “Eo Eo” by Anja Veterova. That was my first audition ever and the best one till now. We didn’t perform as a duet at the auditions because we met there and now, we are practising together for Sofia.

M: On the 6th of September there was an audition to choose the Macedonian representative for JESC 2015. We had to sing two songs, one by our choice and the other one from the songs that had been performed at JESC for Macedonia. We had to choose one of these three songs: “Eo, eo”, “Ding, Dong” or “Sent me SMS (Prati mi SMS)”. I sang a song from Toshe Proeski which is called “Tajno Moja” (Secret mine) and I chose “Eo, eo” from Anja Veterova, who participated for Macedonia at JESC 2010.

We hadn’t preformed as a duet before. They called us two days later to tell us about the good news. Me and Ivana didn’t know each other before the auditions. I’m happy that me and Ivana are going to take part in the contest together. The both of us met there and we’ve been hanging out since then, not only for rehearsals.

E+: Tell us what your song is about. What is the thing you like the most of “Plestenka”? How was the composition procedure?

I: I wrote the lyrics of the song and I had a very good felling while doing so, because I was writing about my exiting emotions and lot of happiness and love. Our song means braiding love, happiness, luck, freedom, peace and it says that we can do everything better together.

We composed the song in 10-11 days. It was a little hard, but every time we thought about the big stage and lot of faces looking at us , everything started being easier.

M: Our song is about how the world should be a better place: no wars, just peace. Ivana also told me that she came up with the idea to call the song “Braid” because both of us are just like two strands of a braid and as our friendship grows the braid keeps braiding. I love the part where the music goes slow and quieter and our voices “interrupt” each other. The song was produced in Kristijan Gabrovski’s studio where Risto Samardziev and Kristijan Gabrovski made the arrangements. 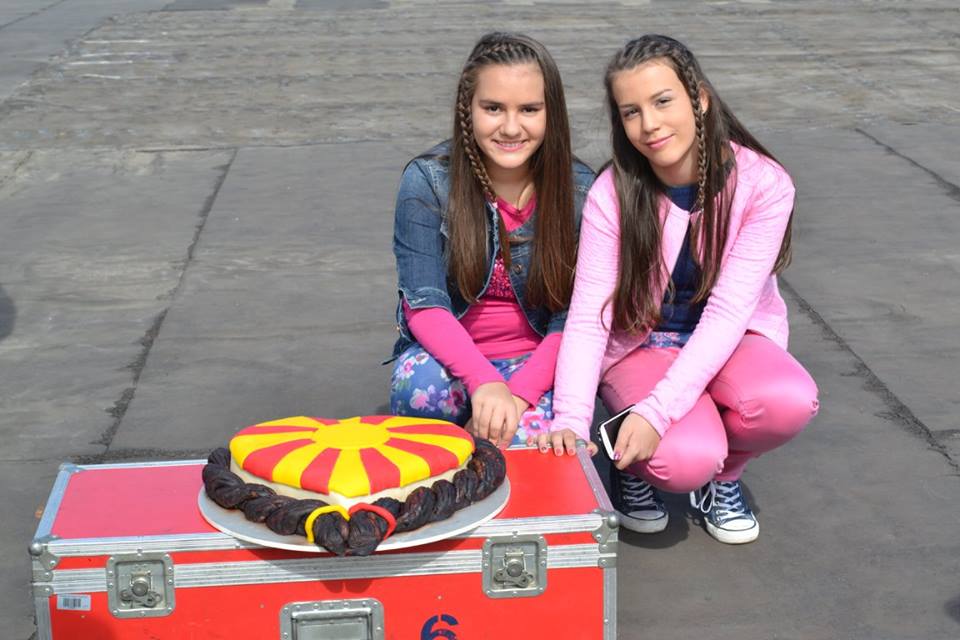 E+: Are you going to make some kind of revamp in “Pletenka” for Junior Eurovision?

I: No, we won’t make any changes in the song at the live performance. It’s going to be the same version in Sofia.

M: No, we’re not going to do any revamp in the song. It’s going to be the same as the published one.

E+: The song is composed by yourselves, which is not a rule at Junior Eurovision now. What would you tell other participants to impel them to compose their own tracks?

I: I wrote the lyrics of the song, as I said in the previous question. Before you start writing, you need to know what are you’re writing for, so in my mind I had two girls with braided hair which is an example of everyone together is stronger, happier…, no wars because we’re all the same; that’s how I wrote the lyrics. It wasn’t as easy as it seems, but at the end of the day it came out great.

M: First of all, you must have an idea for the content of the song. I don’t know much about writing lyrics, I’m not so good at that. The good part is that I know how to write music. I wrote the music, but it wasn’t as easy as it looks. You need to have a knowledge to write something by yourself.

E+: Some people think that asking children to compose their own songs for JESC is too much pressure for them. What do you think about this?

I: As I said before, if you feel the music in your heart, you can write any lyrics and music. No matter how old you are.

M: I think that if you want to do something and if you’re really into it, you can do anything without giving up. For me there was no pressure at all.

E+: Your song was presented through an official video.  How was the shooting of the clip? Can you tell us any funny anecdote?

I: Yes, we made an official video which was filmed in the centre of the capital of Macedonia, Skopje. It was so exciting to be in a music video and be the star of it. There were a teenage band behind us and lot of kids and teenagers in the middle of the video till the end, I’m pleasured that they all came to support us. I can’t describe the feeling, it was so fun and awesome.

M: The video was filmed on the roof of a mall and we asked friends from our classes to be there. There were kids from the choirs “Golden Nightingale” and “Picolo” too. The funny thing about the video is that we didn’t practice any kind of choreography and all we had to do is have fun.

E+: It is too soon maybe, but have you already decided about how your stage performance will look like? How about the costume?

I: We’re getting ready and we have a lot of work. We haven’t started working with the dancers yet, but I think that these days we will have a rehearsal. The performance will be with dancers and actually we don’t really know what we’re going to wear there but we’re working on that too.

M: No we haven’t. But we know that there are going to be dancers in the back. We are going to have a rehearsal one of these days and we still don’t know anything about what are we going to wear.

E+: What do you expect from the upcoming experience at Junior Eurovision? What do you think it will mean for your musical career?

I: It means a lot to me and Magdalena, it’s a really big thing for us. Our friends and families are so proud of us because we’re going to take part at this awesome contest and we are so excited to represent our country the best as we can.

M: It’s going to be a big opportunity for me and the biggest contest I’ve ever been a part of, so it’s a really big deal for me. I hope that there I have the opportunity to meet some people with whom I can accomplish music cooperation in the future.

E+: Have you taken a look at the stage design for this year’s Junior Eurovision? What do you think?

I: Yes I’ve seen it. It’s a really big thing for us and it’s like heaven. We are so excited about it.

M: Yes, of course. It’s huge and beautiful. I can’t wait to step on that big stage. It’s marvellous. 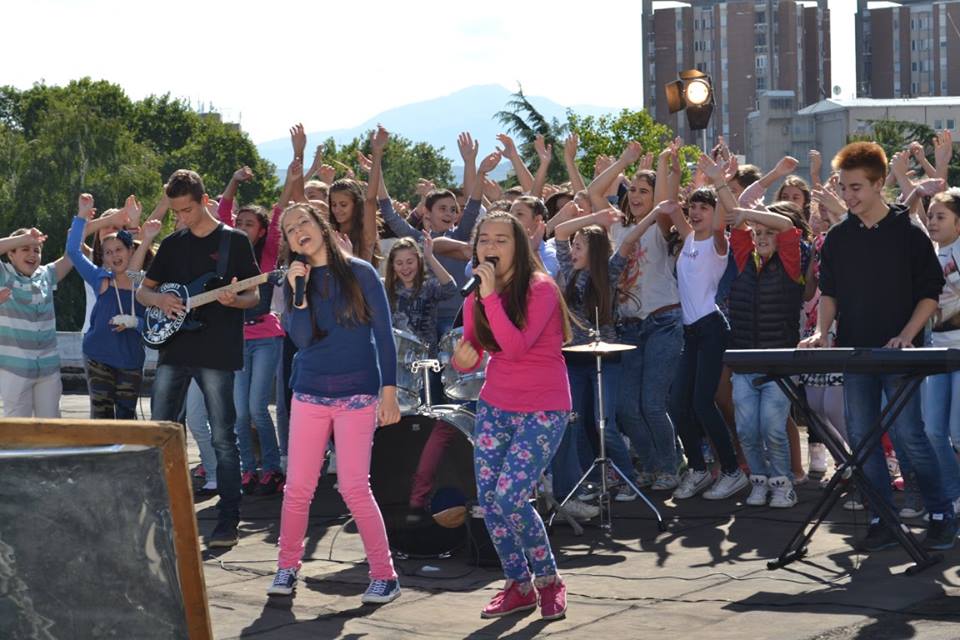 E+: Do you usually watch the senior Eurovision? Would you like to take part in the future?

I: I always watch Eurovision. Of course, I have wanted to take part in that contest since I was 4 and now I’m going to Junior ESC which I’m so happy about and it means for me as much as the adult ESC .

M: Yes, I’ve watched it since I was a little kid and I’ve always dreamed to be on the Eurovision stage and to represent my country. I would love to take part in the adult Eurovision.

E+: If you had to choose a Macedonian act to compete at the senior Eurovision, what would be your choice?

M: I would choose Bobi Mojsovksi. He’s a singer who was at the X Factor Adria 2015. He has a beautiful and a powerful voice and I think that he would represent us in the best way.

I: I listen to English pop music everyday, it’s like my routine. I also listen to Macedonian music but more English. My favourite singer is Adriana Grande, I’m a really big fan of her. I would be the happiest person in the world if I meet her one day. My favourite school subject is English, but also the others are great. My favourite hobbies are Volleyball and Basketball. I am in a volleyball team and I am also playing at school.

M: I have been singing since I was seven. My first song, called “Pupil”, it was recorded in 2010 for the 65 anniversary of the establishment of my primary school “Mirce Acev”. My second song was composed to take part at the Children’s Festival “Golden Nightingale” in Skopje, where I sang as a soloist “Mice play a dance”. My next performance was at the International Children’s Festival “Lake Pearls 2013” and “Lake Pearls 2015” in Struga, Macedonia. I was also in the International Children’s Festival “Asterisks 2014” where I sang my third song called “First Love”. My most significant performance was at the Children’s International Festival “Slavianski Bazaar 2013” Vitebsk, Belarus. My favorite music is pop and I mostly listen to English songs. Favorite school subject: I have to say that I love Art and English. In my free time I love drawing portraits.

E+: One word which describes Ivana and another one which does so of Magdalena:

I: Magdalena is multi-talented. She loves singing, drawing… She makes beautiful hairstyles and she likes decorating cakes with her mom.

M: Ivana is creative. She is the most creative girl I’ve ever met.

I: Yes we’re gonna send big hugs, kisses and warm greetings from Macedonia. Love you and thank you for the support!

M: Hey guys, to me this is a dream come true. Music is everything for me, music is my life. Better said, music makes the world a better place, that’s why everyone should listen to music. If you have a talent don’t be shy, show it to the others, show it to the world. I appreciate all your support and I love all of you so much.

E+: Thank you very much for your time and see you in Sofia!

I: Thank you too!

M: Thank you for your kind words.

Ivana Petskovska and Magdlena Aleksovska will represent FYR Macedonia at Junior Eurovision 2015 with the song “Pletenka – Braid of Love”, written my themselves: