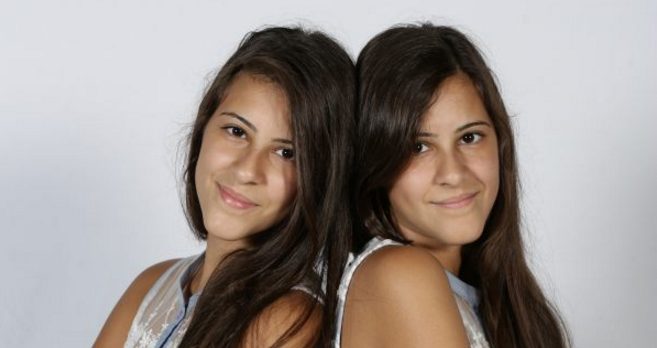 It’s time to talk to the Italian twins, Chiara and Martina Scarpari!

Check out what they have told us below:

Hello girls! First of all thank you so much for giving us this interview as Italian representatives at Junior Eurovision 2015 and congratulations on winning the ticket to Sofia!

When we were told they had to re-run the final duel we felt a bit sad, because we had already won, we had also made some celebrations with friends and family, all people had also congratulated us for the victory… We didn’t have any doubts that we had won the contest, so we were happy to repeat it. The second victory was beautiful and exciting.

E+: How did you receive the proposal to compete at the national final for Junior Eurovision? What does representing Italy after winning last year mean for you?

The news came to us in summer, RAI called us and told us that we had been selected to take part in the auditions for the first “Ti Lascio Una Canzone” program of the season, where we would compete to represent Italy at Junior Eurovision 2015. It was an actual surprise!

We are very happy to represent our country and we will do our best without looking at the last year’s victory. Of course, the stress is bigger knowing that your country won last year.

E+: Your song is composed by a very famous Italian composer, Gigi D’Alessio. How do you feel knowing that you will perform a song by one of the most popular musicians and singers in Italy?

Gigi D’Alesio has been very nice with us, he has written us very beautiful lyrics in whose composition we have participated too. We are proud of singing a song composed by such a great artist, famous in Italy and abroad.

E+: Can you tell us what your song is about? What is the thing you most like of Viva?

Our song, titled “Viva”, is a true hymn to life, to all those little things of everyday life which make our age special. One of the most beautiful part of the lyrics is that one dedicated to our beloved granddad who unfortunately passed away but surely smiles and watch over us from heaven.

E+: Have you already decided how you stage performance will look like? How about the costumes?

We want it to be a surprise, so we won’t reveal anything. We have spent a lot of time looking for the appropriate costumes together with some experts of RAI, who will travel to Sofia with us: designers, stylists, make-up artists…

E+: You recently released an official video of your song “Viva”. How was the shooting of the clip? Any funny anecdote you can tell us?

The official videoclip of our song was released a few days ago. We like the video so much because it is happy and cheerful, and it represents us very well. During the shooting we laughed a lot, we also run and dance. It was like a game for us and we are very happy with the result.

E+: Which are the similarities and differences between Chiara and Martina? (Hobbies, favourite subjects, favourite artists…)

Although we are identical physically, we even exchange ourselves, our character is totally different. We only both like puzzles, singing and dancing. I (Chiara) am more diligent and outgoing than Martina, who studies less than me and is more shy. Yes, but I (Martina) am more generous and selfless than Chiara. We usually have some fights because of these differences, but we love and protect each other.

E+: Do you usually watch the senior Eurovision? If you had to choose an Italian artist to compete at the contest, who would you choose?

Yes, we usually watch Eurovision, it is a very good competition. If we had to choose, we would send Marco Mengoni again because he is a very talented singer.

E+: How did your parents discover they had two talented children? When did you start singing?

Our parents realised that we had an innate talent when we were very little, even our teachers always asked us to sing at school and said that we were very good at singing. We can say that we started singing at the age of 3, our musical passion grew with us and we started attending vocal lessons when we were 10.

E+: Have you thought about the future of your musical career? Would you like to sing as a duet or separately?

We want to continue our musical career. We hope to go forward and earn more success, carry on our studies and graduate. We will most likely continue singing together because we can’t imagine ourselves separated.

E+: Do you already know any of the other Junior Eurovision 2015 participants from “New Wave Junior”? What do you think about their songs? Have you talked to them about the upcoming JESC experience?

No, we don’t personally know any of the other JESC participants. We have watched some videos of the competing songs on YouTube and there are some good ones, but we don’t know any of the performers personally. We want to make new friends once in Sofia.

E+: Did you watch Junior Eurovision 2014? How did you feel when Vincenzo Cantiello won the competition?

Yes, we watched Junior Eurovision 2014 and we became very happy when Vincenzo Cantiello won. We never imagined that we were going to represent Italy this year, for sure.

E+: Could you send a message for our readers and fans of the competition?

Firstly, we want to thank all your readers for their attention. We want to remind all of them that we will be performing on November 21 in Sofia representing Italy at Junior Eurovision 2015. Don’t miss it and support us by televoting. Thank you very much!

E+: Thank you very much for your time and see you in Sofia!

Twins Chiara and Martina Scarpari will represent Italy at Junior Eurovision 2015 with the song “Viva”.