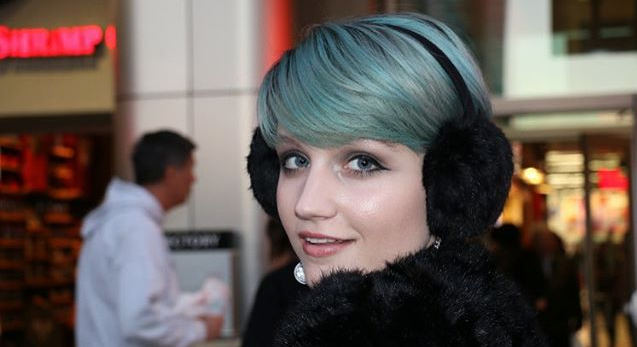 ESC+Plus has talked to Anja Katar, finalist of the Slovenian national selection for Eurovision 2016. The young singer will perform “Too Cool” in the final of EMA 2016, set on February 27.

ESC+Plus: Hello! First of all, thank you so much for your time and congratulations on having been selected to take part in the Slovenian national selection for Eurovision 2016.

E+: Can you tell us about you, your musical career and important achievements?

I’m an 18-year old singer songwriter. I’m originally from Slovenia, but I moved to San Jose, CA in 2012. Trained in classical piano and dance since age 5, I always knew my home was on stage. I performed as a soloist and with my piano trio (violin, cello, piano) as well as danced and won the World Show Dance Championship with my dance group in 2008. I acted in the most viewed Slovenian movie “Going Our Way” and its sequel and was featured on the Slovenian X Factor. Upon moving to the US, I started writing my own music and became heavily involved with musical theatre and jazz at the VC Conservatory. I starred in many musical lead roles and received Outstanding Musicianship awards at numerous jazz festivals. I composed and directed my original short musical as well as vocal directed and directed spring musicals.

I was awarded many times for my performances as a singer songwriter and musical theatre actress and have received the VC Conservatory Artist of the Year Award. My performances include the Slovenian National Opera, Philharmonic, California Theatre, San Jose Center for the Performing Arts, and the Neil Simon Theatre in NYC. Upon successfully completing my $20,000 Kickstarter campaign, I recorded my debut album at Universal Music Group in Los Angeles in June of 2015. I was also selected to attend and perform at the prestigious Broadway Artists Alliance Intensive and Industry Showcase in NYC.

I am currently attending Berklee College of Music and am taking classical piano lessons from former Stanford University Professor, Dr. Nicholas Isaacs and voice lessons with former Princeton University Professor and recording artist, Ruth Gerson. I am set to perform at the Slovenian Song Festival (Slovenska popevka) 2016 and EMA 2016 where I will debut my new songs, “Čas je zdaj” (The Time Is Now) and “Too Cool”, respectively.

Ever since I can recall I wanted to be a singer, a performer. As a little girl I remember watching the Eurovision and wishing I could one day represent my country and share my music with Europe. Applying for EMA 2016 was a great opportunity to challenge myself and take a step towards that dream.

E+: How did you feel when you knew you had qualified for the final? Did you expect it?

I never really thought about it. I submitted a song that I truly believe in, and that always has and always will be the most important thing for me – to make good music. What comes after that is in the hands of other people and I am very honored that they saw the potential in me to put me in the finals.

E+: What it would mean for you to represent Slovenia? Can you tell us about your song? What is the story behind the lyrics?

That would be incredible (but also a great responsibility:)! Despite its small size, Slovenia has a barrage of great talent and music and I would be very humbled if I ended up being the one to represent and showcase that to the rest of Europe.

The song I’m performing is “Too Cool” – a pop/soul/rock motivational jam :). I wrote it a few months back after being rejected at an audition. The first thing I thought of after finding out I didn’t get a callback was a line that ended up being the opening line of the song: “I wear my tears like diamond earrings.” We all have dreams and goals we’d like to achieve, and when we go into the world and start fighting for those dreams, we are sure to face obstacles and rejection. In those moments, it’s important to not give up, gain strength through challenge, hold our heads high and say “I’m too cool for you.”

E+: Why do you think your song has to be selected for Stockholm? What are you strengths to reach the top in the competition?

I believe my song has a very universal message, one of hope and self-assurance – something we all crave in certain times of our lives. I believe my strength is in the experience I’ve had with performing, and most importantly, my personal connection with the song as I wrote it myself in its entirety and I believe this lends itself for a much more honest and approachable performance.

E+: Have you started to prepare your stage performance for “EMA 2016”?

Yes! As someone who loves fashion and comes from a theatre background, I always visualize images while I’m writing a song. From the gecko, I’ve had very clear ideas for what I wanted to do with the performance – now it’s only a matter of working out the details and making everything come to life.

E+: Do you usually watch Eurovision? What are your favourite songs of the history of the competition?

Eurovision has always been a big event in my family – we always follow all the contestants and live shows and have our favorites picked out haha:)

Some of the best performances from the recent years in my opinion were Lena’s “Satellite” and Loreen’s “Euphoria”. Of course, as a European girl, I am a sucker for Il Volo:) and I also love an oldie but a goodie – Celine Dion’s “Ne Partez Pas Sans Moi” (when I was in 6th grade, I actually memorized the whole song as part of my French class!)

E+: If you could choose a Eurovision former participant to sing with, who would it be?

The one, the only, Celine Dion. I mean, who wouldn’t want to do a duet with her?:)

E+: Besides Eurovision, what are your plans for this year?

It’s gonna be a busy year! I have my NOMAD EP planned for release, lots of new music (and possibly new album) to record, play shows in Europe and US and many auditions. As I come from a tech family (my brother is currently in the process of launching a new social media app, TEMPO) I am also very focused on trying to find new ways to break in the music industry and disrupt and alter the standards.

E+: Finally, can you send a message for our readers and Eurovision fans?

Congrats for getting through this interview!:) Thank you for all the support, and if you want to stay tuned through my journey to EMA 2016, have your feed flooded with a combination of goofy and artsy pics, or hear my potential Eurovision song “Too Cool”, you can follow me on Instagram, Facebook, Twitter, Snapchat (@dare2jump), or you can check out any of the links below:

E+: Thanks for your time and good luck!